Alrighty, if I’m being honest and technical, I became an adult two weeks ago, but in everything other than number, I still haven’t quite gotten there yet.

My latest adventure of this summer was at the Atlantic District Youth Camp, in New Brunswick, which took place at the Greenhill Lake Camp, June 27-July 1. Five days roughing it in a cabin with six other girls made me nervous at first, until I stepped foot onto the campground. I shared a room with some dear friends and some new people, who I quickly became acquainted and friends with (sharing a room can do that). 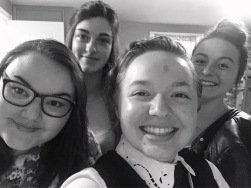 We arrived Wednesday afternoon, and from that day forth the schedule was always the same: breakfast at 8:30 a.m, devotions at 10:00 a.m, lunch at noon, team games, separate boy’s and girl’s swimming, supper at 5:00 p.m, and nightly service at 7:00 p.m. Just to give you a feel for the setting, if you’re familiar with the Little House on the Prairie, you would know everyone traveled to church in a wagon or on foot; it was very pleasantly similar at camp. Every service, people walked from their cabins, in the sun and rain, to get to the sanctuary for church.

And what anointed and powerful church services we had! The sanctuary floor was not built to withstand an apostolic praise break, and on a couple occasions, someone had to speak up, because there was a concern that we would fall through the floor. People spread out, but not even that could stop our praise!

I take no credit for this great edit

Bro. Galloway, the camp’s invited speaker, ministered incredibly and sincerely to the young people. I speak for myself in saying that every one of his messages touched my heart. He spoke about identity, value, having power in our voices, and letting God write out the story of our lives– each of those things being so important for me to hear as a young girl just out of high school.

You don’t have camp without having fun, and boy did I enjoy myself! One depressing, grey day, when the girls were banished to a basement, while the boys had their water time, I found out I wasn’t half bad at painting. Since I’m a pretty positive person, I’ll say the painting wasn’t half bad, rather, it was half good. 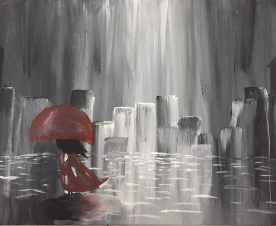 One night, the campers played capture the flag in the dark and each got glow sticks; that was fun, except for the water that got in my shoes. One thing to know about me, is that I’m not sporty; however, I won gold for (my) team seven– also called GFN— during the budget olympics. GFN (God’s Favourite Number) ended up winning the scavenger hunt with twenty-one points, which, I believe is the reason our team placed first at the end of camp. Allow me to brag for a minute: *clears throat* “GFN! GFN! GFN!”

I bet there was good service there…

I’ll tell you why I thrived in the Greenhill camp atmosphere. No internet meant not much phone usage, with the exception of taking pictures and videos of the pre-service dances. I talked to people. I reconnected with childhood friends and met new ones. It was an old-school environment, where social media and the internet hardly existed, and I loved every second.

God has made this summer the most eventful one of my life so far, and I have been so blessed to be able to take part in this much already; and I’m excited to say that it’s still not over yet. There is more to come, and I may just freak out a little bit.

last day with my people

I hope this diary-like post didn’t bore you; sometimes it’s hard to explain the pure awesomeness of an actual thing, especially when what happened was completely above words.